Spellbinders Halloween and a Santa card too

Spellbinders makes great detailed dies.  This first card used a die set named Eek-a-Boo. It also included the ghost that I haven't used yet. My grandkids aren't going out as a devil and skeleton, but I had them in mind when I made their hair a reddish hue and blue eyes.  The jack o'lantern treat buckets and bats were included in the die set. The fence is a die from My Favorite Things. 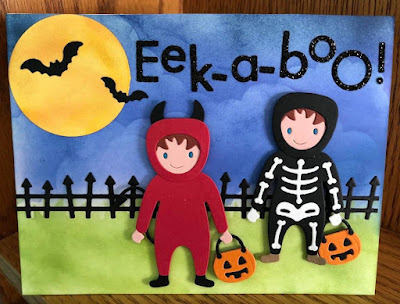 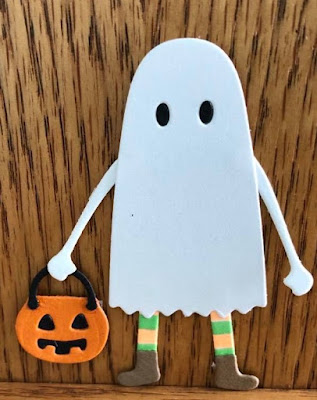 This card uses two die sets from Spellbinders. The car is cut from Sunday Drive, the license plate, trunk trim, skeleton and witch are all from Sunday Drive Halloween. The spiderweb was cut from a Stamps of Life die. The backgrounds on both this card and the next were done with Distress Oxides, sprinkled with water for some of the dots and also a mist of shimmer spray from Avery Elle. I didn't like that the spider web looked like it should be attached to something on the right so I drew a tree in. In four subsequent cards, I cut the spiderweb and used parts of it on each card. 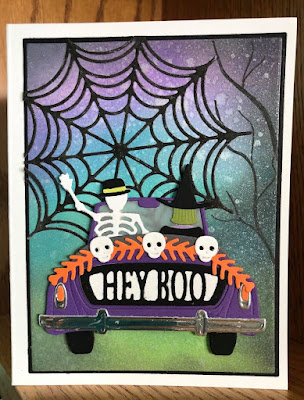 This card uses the same Sunday Drive for the car, the Santa, deer, license plate and trunk garland are all from the Sunday Drive with Santa set. I've made 17 of these cards, personalizing them for neighbors. 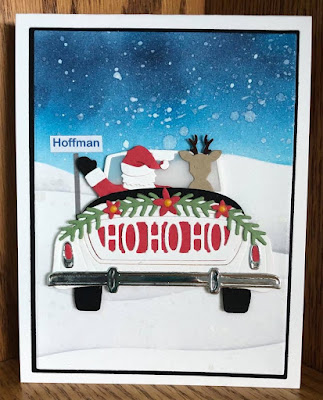 Last of summer, first of fall

I hang onto summer as long as hard as I can, even though the first part of fall is typically beautiful in Michigan. Today is one of those days.

Life has simplified a bit since my last post now that ties to the cottage have been cut. Wonderful memories will last a lifetime but the worries of maintenance are gone. In a difficult year nationwide, many things have eased for me personally. Being home more has reminded me that I am happiest doing quiet things which include making cards and scrapbooking, knitting, reading, and I have learned to binge watch TV. That was a surprise to me, I never thought I'd enjoy it but here I am, an old dog with a new trick.

I worry about the divide in this country and while the election can't come soon enough (get it over with!), the hurt between citizens won't heal anytime soon. I know there aren't people that I won't look at the same way again, not because their opinions differ from mine, but the way they have behaved. This is true on both sides of the proverbial fence. There are many whose basic beliefs I agree with but not the delivery. I am disappointed when either side, whether in a political, religious, or something as benign as Coke versus Pepsi adds unwarranted comments to their argument or claims that ALL of  "them" are wrong and NONE of "us" have ever made a mistake. I wish everyone in high school was required to take a debating class. They would learn to research BOTH sides of an issue and how to argue for each side. We routinely were told to flip and suddenly present the opposing view as if we hadn't just been arguing for instead of against.

Email ThisBlogThis!Share to TwitterShare to FacebookShare to Pinterest
Labels: My thoughts

This card was made for a friend's mother who is very fond of this flower. The stamp used is named Harmonious Hibiscus , made by My Favorite Things. I heat embossed the stamped image with gold embossing powder on Gina K. Design's Bubblegum Pink cardstock before coloring with Copic markers. I was told years ago not to use Copics on cardstock, but this paper was heavy enough and while I did blend shade of pink and green, I was working on blending in a typical fashion. I used white Prismacolor pencil for some highlights on flowers and a few shades of green on the stems. The black background is all black Copic marker on pink paper. I really enjoyed working on this. The second photo, taken on an angle shows the golden glow of the embossing powder. 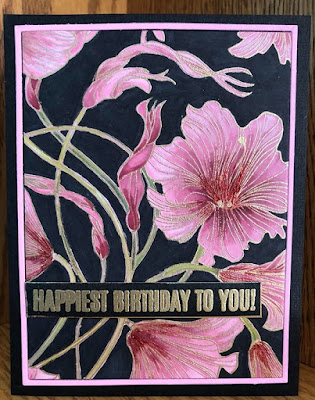 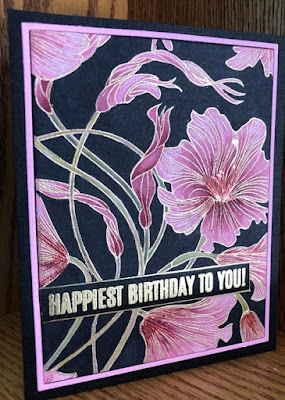 Posted by Knitty at 2:42 PM No comments: 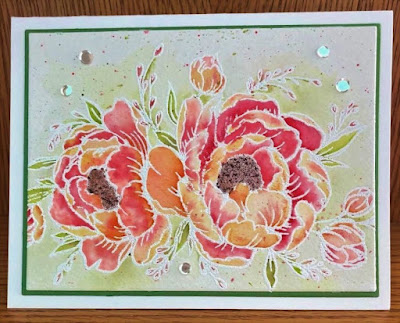 Posted by Knitty at 2:30 PM No comments:

One of my nieces has two dachshunds. She would have more, but she only has two hands. 😉 She has been working from home often and has had more Zoom meetings than usual lately. That fact and her love of Doxies led to the creation of this card.

The stamps are from two different sets by Newton's Nook, Delightful Doxies, and Dress Up Doxies (the superhero and taco costumes) but I only used a small part of six images to make 1.25" squares to resemble a Zoom meeting (hence the different backgrounds). The ID number over the computer screen represents her age and birthdate. I did the comments inside in Word. I can't wait to give this to her! 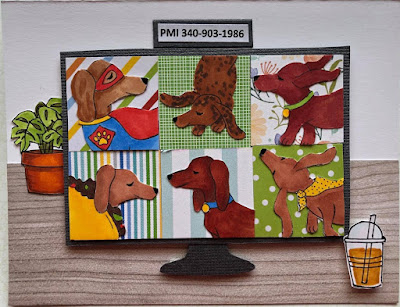 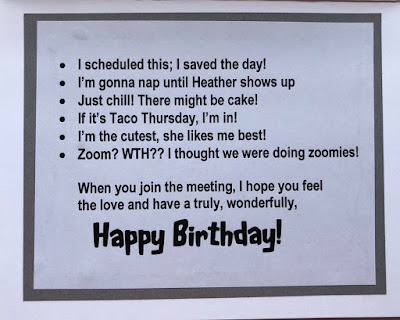 Posted by Knitty at 2:15 PM No comments:

Email ThisBlogThis!Share to TwitterShare to FacebookShare to Pinterest
Labels: cards

One son asked if I could make a birthday card for a coworker's birthday in two days. Of course I could! I had just received an order from Gina K. Designs and wanted to use this stamp and die anyway, now I had an immediate reason to use it and not do anything boring, like dusting and vacuuming! 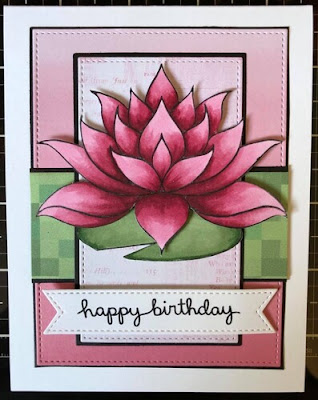 This was colored with Copic markers using Gina K. Designs Lovely Lotus stamp and coordinating die.
Posted by Knitty at 3:10 PM No comments:

Sympathy cards are always difficult. Making a card to send to a man can make this more of a challenge. The recipient of this card does a bit of painting and creates with mosaics. When I think of him, I think of abstracts, hence this card. The paper is black Yupo paper, the alcohol pearl inks are from Ranger. I cut out the image with a die from Ellen Hutson's Essential Rectangles that cuts both a rectangle and a very thin frame at the same time. I used the die a second time with green cardstock to create the green frame, then used the green with a script die cut greeting inside that read "with sympathy" before a handwritten message. 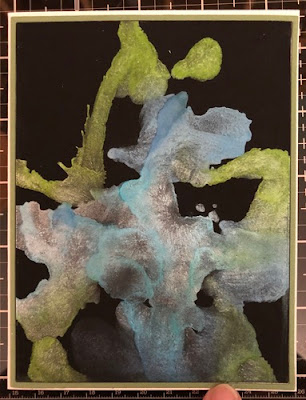 Posted by Knitty at 9:50 AM No comments: 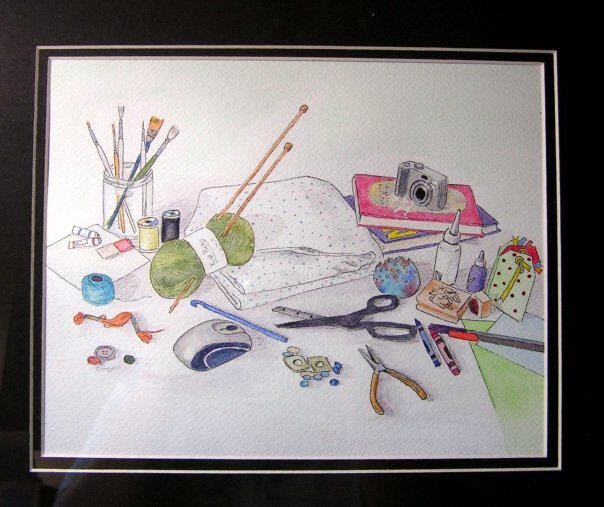 Ink and watercolor depiction of most of my craft interests